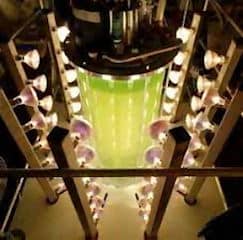 Solida Biotech PBR (Photobioreactor) systems are devices that can contain and grow algae, cyanobacteria and other photosynthetic organisms under heterotrophic and mixotrophic conditions.

The PBR is a controllable environment in which to grow algae, where the supply of light, nutrients, carbon dioxide, air, and temperature can be controlled and regulated.

It is a totally enclosed system with several major advantages as the bioreactor can prevent contamination (from other algae species and bugs), and allows easier cultivation of one algae strain. It also offers better control over a range of other growing conditions, like the pH, light, carbon dioxide and temperature.

In addition to this, a closed system reduces evaporative water losses, and has lower carbon dioxide losses, which all lead to higher cell concentrations. In other words, there are more grams of algae produced per litre of water.
Solida photobioreactors are suited for research and production applications such as:

Solida PBR are available in standard and custom fit volumes starting from 1 litre up to 100 litres for research and pilot production. Open field and large scale PBR are also available on request.