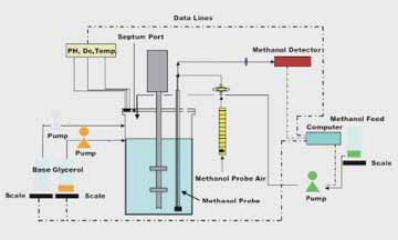 The system has been designed to connect easily to an existing bioreactor system without taking up large amounts of valuable bench space. This is a complete, standalone unit providing monitoring and control of methanol concentration. No computer is required. Data logging can be performed simply vby connecting a 0-10 volt chart recorder to the rear panel or directly into a computer system. The 0-10 volt analogue output can be inputted directly into the Solida Biotech PLC automation and software along with other peripheral equipment such as weighing scales for real-time data acquisition. This then allows the user to create sophisticated, application-specific control algorithms. Our system can alternatively be connected to other proprietary controllers and software from different suppliers available in the market.

Although the Methanol Sensor has been designed for the measurement and control of methanol concentration in pichia pastoris fermentations, this system may prove useful in many other applications.
Repressive carbon sources such as glucose or ethanol both exhibit negative effects, and complete utilisation of these carbon sources in the batch phase allows depression. As our Methanol Sensor also detects ethanol, through observation of an increase in sensor signal during the batch phase, this may indicate ethanol production. Complete exhaustion of the ethanol prior to methanol induction allows repression to be avoided.
Mixed feeding protocols, mainly implemented with MutS strains can be a very effective means of increasing production of the desired protein. Various compositions of mixed carbon feeds, such as glycerol/methanol, have been employed to increase productivity and, with the ability to monitor and control the methanol concentration, it is possible to separate feeding systems for glycerol addition, thereby allowing the user more flexibility in maintaining limited glycerol concentrations.
The Solida Biotech methanol sensor measures the concentration of volatile, combustible components in the liquid phase. It can be used to measure the concentration of a variety of alcohols directly, which may be useful in applications such as biofuels or bioremediation.

The standard probe is 12mm in diameter and is compatible with all bioreactor suppliers. Probes are available separately and can be customised to fit any bioreactor system.